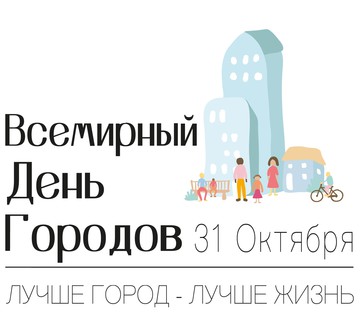 During the International Forum for High-rise and Special Constructions 100+ ForumRussia 2019, Yekaterinburg will host a celebration of the World Cities Day. The themes of the events – titled "the Future City" for 100+ Forum Russia 2019 and "Better City, Better Life" for WCD respectively – are closely interconnected.

World Cities Day was introduced by the United Nations General Assembly in 2014, when it was decided that October 31 would become the World Cities day. Since then, World Cities Day has become an integral part and a finishing touch for the line of Urban October events that are organized under the aegis of UN-Habitat in cities and towns worldwide. October is the month when local, regional and national authorities and partners in various countries of the world host events dedicated to sustainable urban development.

The subtheme for the World Cities Day changes every year and turns people's attention to a present challenge in urban spaces, as does the host city.

World Cities Day 2017 was celebrated on October 31 in Guangzhou, China under the subtheme of Innovative Governance, Open Cities. October 2017 saw more than 100 events in 47 countries worldwide dedicated to the World Cities day and the World Habitat Day.

World Cities Day 2018 was celebrated in 70 cities worldwide and the main event was held in Liverpool, England. The audience total exceeded 200 people from 15 countries. The subtheme was Building Sustainable and Resilient Cities and the subject was discussed in a number of talks, seminars and presentations.

Urban October 2018 was kicked off by the celebration of the World Habitat Day in the headquarters of UN-Habitat. The theme of the event was titled Municipal Solid Waste Management. 2018 was the year when Moscow joined the celebration. Moscow Urban Forum (MUF) partnered with UN-Habitat to deliver a session titled Zero-Waste Economy City: City Environments for Eco-Friendly Businesses which was held on 16 October 2018 during the Open Innovations Forum housed by the Skolkovo Innovation Center.

Yekaterinburg has become the first city in Russia to be selected as the host-city for the World Cities Day. On 31 October 2019, within the framework of the UN-Habitat event the capital of the Ural region will welcome members of state and municipal authorities from foreign countries.