Carlo Ratti: “Now citizens are given limited access to participate in the urban innovation process” 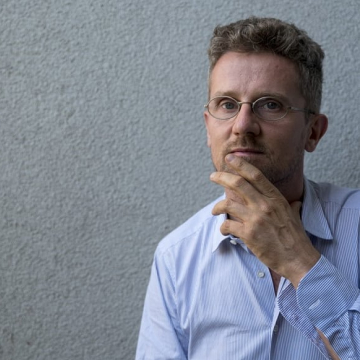 Carlo Ratti is a founding partner of the international design and innovation office Carlo Ratti Associati and a professor at the Massachusetts Institute of Technology. In the last decade, Carlo has given talks around the world on the theme of Smart Cities, while his work has been exhibited in international venues. Two of his projects – the Digital Water Pavilion and the Copenhagen Wheel – were hailed by Time Magazine as “Best Inventions of the Year.” He has been included in Blueprint Magazine’s “25 People who will Change the World of Design” and in Wired Magazine’s “Smart List: 50 people who will change the world.”

Carlo Ratti is currently serving as co-chair of the World Economic Forum Global Council on the Future of Cities and Urbanization. Shortly before his speech at the VIII International Forum and Expo 100+ TechnoBuild, he told how he came to studying "Big Data", what urban technologies will be on top in the nearest future and what is the concept of Senseable Cities.

– Do you remember the moment when it first occured to you that some digital technology could change the life of an entire city? How did you come to the idea? What was the technology?

– Ildefonso Cerda, who had a hand in shaping modern Barcelona, said this in his book in 1859. “The building of cities, if it is not so already, will soon become a genuine science calling for major and profound search in every branch of human knowledge and, most especially, into social science.”

This made a big impact on me while I was completing my PhD at the University of Cambridge and spending time as a visiting scholar at the MIT Media Lab in the early 2000s. I started becoming aware that Big Data could revolutionize urban studies and turn Cerda’s dream into reality. Since then, we have seen how fast digital technologies progressed. Back in 2004, our team at MIT was the first one in the world to publish a paper on using anonymized mobile data to understand the dynamics of cities. A phone could collect 10-20 location points every day with an accuracy of a few thousand feet. Fast forward to 2021, our smartphones are equipped with GPS, which is capable of tracing our actions with a supra-Hertz frequency and sub-yard accuracy by the second. The research 17 years ago gave us a glimpse of what big data could do in the urban scale, and now we are witnessing how the evolution unfolds!

– In the years of your studying the impact of digital technologies on cities, what are the main conclusions and discoveries that you have made for yourself?

– There are many projects I can think of, but I would highlight three here that are interesting for their impacts in the society beyond academia. The first project Copenhagen Wheel was a collaboration between MIT Senseable City Lab and the city of Copenhagen in 2009. It is a sensor-imbued system that can be installed on a bike to track its speed, direction and distance traveled, as well as collect data on air pollution. It gave birth to our first startup Superpedestrian, which is now a global player in micro-mobility.

Secondly, our HubCab project in 2013 took data from over 170 million taxi trips in New York City. We then analyzed the existing patterns and predicted the potential use collective mobility in the future. This research later materialized into UberPool and Express POOL. Ride-sharing systems like this could help reduce the number of cars on the road, in turn lowering the levels of congestion and pollution.

The third project Minimum Fleet uses sensors to develop a new mobility model which could slim the size of the taxi fleet in New York by 40%. It inspired the foundation of our latest startup Data Drive with the goal to revolutionize logistics through urban intelligence.

– Can you name a few technologies that may not be very common now, but will become ever-present in the next decade? Why exactly will they become popular and what will they change in people's lives?

– In the field of mobility, I could see data be used in a more comprehensive way to empower people to select the best transportation options in real time. Since the pandemic, micro-mobility such as shared bikes and e-scooters have been increasingly adopted by citizens alongside trains and buses. They can all be incorporated into what I would call a “Moving Web,” a single platform to display the real-time information of all kinds of transportation tools, and to allow commuters to book various services in one go. One could ride a bike to the station to get on a train, and an autonomous car would already be waiting for them at the other side, ready to take them on the last mile. Hopefully, this could help people travel from one location to another more easily and efficiently.

– Do you think digital technologies can ever get to the cities that are now considered lagging behind? What will precede this?

– Actually, there have been many examples of “leapfrogging”, whereby emerging countries or regions jump ahead of those who had been ahead before, and started exporting innovative ideas to the more affluent ones. In Africa, where telecommunications were developed later than in other parts of the planet, the adoption of mobile phone was among the fastest. And the same happened with Apps that helped various countries solve local problems with technology-augmented solutions, among them mobile banking and interfaces to track real-time crop conditions. Policies favorable to innovation and bottom up dynamics are some of the main preceding factors to growth.

– What steps should each person take to make the environment around them more sustainable? What do you think prevents people from taking these steps now?

– We need speed up the transformation of the urban environment. Big Data can help foster individual behavioral change, as the sophisticated datasets, visualized with clarity, could inform people to make more sensible decisions for the sake of sustainability.

On top of that, citizens have another big role to play. Think about a city as a lab with continuous experimentation. There, new ideas can be tested by the people with an awareness that imperfection is a natural part of the development process. Their opinions would be discussed and carefully evaluated, creating a feedback loop that helps ascertain which innovations should stay or not. It is a structure that goes as far back as the ancient Roman time, where the physical space (urbs) was shaped by an active community of citizens (civitas) who debated urban affairs in the public forums.

Looking at the situation now, citizens are given limited access to participate in the urban innovation process (The failure of the Quayside project in Toronto by SideWalkLabs is a recent example, as I wrote in the World Economic Forum). Future initiatives should be more proactive in soliciting public opinion to maximize their chances of success.

– Suppose many years have passed. You have grown old and retired. What results of your work would you like to see then?

– On my epigraph I would like: “Struggled for change, achieved some”.

– What are you planning to talk about at 100+ Technobuild and why is this topic important?

– My presentation will revolve around the concept of “senseable cities”, a term I prefer over “smart cities” when talking about future urban space. A word with double meaning, “senseable” implies a human city, where technology can help us sense but also be more sensible. And the key to get there is to employ sensing strategies that give cities the ability to change quickly based on what citizens need. I will discuss this through the present application of Big Data, artificial intelligence and the Internet of Things and their potential development in the coming years.

Sensing is a subject especially worth investigating in this era. COVID has resulted in dramatic changes in many aspects of our lives – from mobility to public hygiene and beyond – in record-breaking time. With many technological tools at our disposal, we need to understand how to leverage their power and advance our built environment in the period of “creative destruction”.