DEVELOPMENT OF SOCIAL AMENITIES IN EKATERINBURG WAS DISCUSSED AT INNOPROM 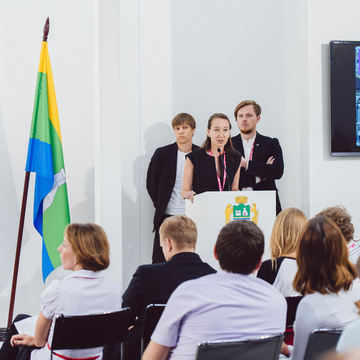 Residents of the city - the participants of the educational program "How to create a new city projects", initiated by “Gildiya Stroiteley Urala” (Urals Civil Engineers’ Guild), together with the online school Vector, selected objects of interest for the study, and spent two months to study the territory, identifying problem areas and finding solutions. The program resulted in nine projects, five of which were presented at the INNOPROM, other four projects will be shown at an international forum of unique high-rise construction 100 + Forum Russia in October this year. Trade fair visitors together with the members of Expert Council took part in discussion of transformation.

Several people were involved in work on each project. For the study people have selected different in purpose and significance for the city facilities: from Weiner Park - with an offer of full renovation of the untended and "dull," as researchers said, territory to the oldest city cemetery. The area of interest also included a street in the city center, city embankment and a yard in one of the city districts.

According to Vera Belous, CEO of “Gildiya Stroiteley Urala,” groups consisting of ordinary citizens, could present a comprehensive view of an object. For example, the authors of transformation of unused and neglected today  territory under the Makarovsky bridge (one of the main arterial streets of the city), proposed a "hybrid concept" to create a new multi-functional pedestrian zone with cultural and sports facilities. The project also included natural landscape of the territory.

The idea to restore the yard in Uralmash district was called "A Nest of Gentlefolk". This concept includes not only the improvement of neighboring  area, but also the integration of the image of the White Tower - a masterpiece of constructivism, located at Uralmash - to a stylistic decision in the design of the playground.

The old city cemetery - Ivanovskoe, founded in the early 19th century with a territory of 18.5 hectares, it was proposed to turn it into a tourist site - there is a potential for that purpose. Famous Russian writer Pavel Bazhov, famous Urals architects, social activists, artists, merchants and other important personalities in the history of Ekaterinburg are buried here. Authors of the idea proposed to hold clean-ups,set litter boxes, create a road and path network, think about lighting,and create a columbarium as one of the sources of financing. This project had the most emotional response from the members of the Expert Council, and the city mayor Evgeny Roizman called it a serious and significant project, and promised to contribute to its implementation. It is notable that the Ivanovskoe cemetery is located in close to the main stadium where  games of football World Cup 2018 will be held.

Michail Vyatkin, a member of the Expert Council, “This is a memorable place of the city and a reflection of its history - through people, who were buried here. This is one of the most interesting projects submitted, and the Ivanovskoe cemetery may turn into a historic route. "

Many comments followed the idea of restoration of a small park space - “Weiner garden.” Once it was city dance pavilion where the band played and Leonid Utesov performed, but today it is only an untendant park. According to project authors, zoning is needed here, which will allow to turn the territory into advanced recreational area and to return its attractiveness for the residents. Mayor of Ekaterinburg noted, that city administration already has a project for improvement of the park and suggested to unite efforts and refine a concept together.

Alexey Belyshev, a member of the Expert Council, "All the projects are valuable because, firstly, it is an attempt of people of different professions to see the city and make suggestions how to make it better. It is good practice, when our residents, both professionals and ordinary, especially the young care for the city, so every project is interesting, city will benefit from it. "

Expert Council consists of Ekaterinburg mayor Evgeny Roizman, Head of Architecture and City Planning Council Mikhail Vyatkin, Deputy Head of the Administration of Ekaterinburg for Capital Construction and Land Use Alexey Belyshev, Head of the Department of Design of the Urban Environment - Chief Artist Dmitry Fogel, acting Head of the Department of Architecture, Urban Planning and Regulation of Land Relations of the city of Ekaterinburg administration in charge of town-planning activity Sergey Kosenko, executive director of “Gildiya Stroiteley Urala” Vera Belous.