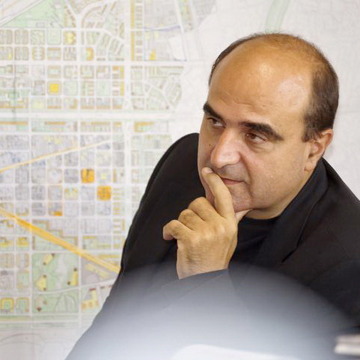 The ex-chief architect of Barcelona will take part in the business program of 100+ Forum Russia. The expert will give an open lecture “Prototyping Future Cities”. The Spanish architect develops the concepts of future cities and strives to implement them in the present. The principles of global connectivity and local self-sufficiency based on the new data engineering technologies are at the bottom of his architectural and city-planning projects. At his lecture, Mr. Vicente Guallart will tell about the daring urbanistic solutions, which may be implemented already tomorrow. Also, how much the future of modern cities depends on them and how one can cardinally modernize the urban area.

Vicente Guallart was the chief architect of Barcelona in 2011-2015 and was in charge of strategic development of the city and its largest development projects.

Since 2016, Vicente Guallart has been a curator of academic programs of the International Laboratory for Experimental Urban Design “Shukhov Lab” of the Graduate School of Urbanism at the National Research University Higher School of Economics (Moscow) and of International Master Program “Prototyping Future Cities: a City and Technologies”.

Vicente Guallart is a co-founder of the Institute of Advanced Architecture in Catalonia (2001-2011), where he led such projects as “Mediadom” (together with the Massachusetts Institute of Technology), “HyperCatalunya”, and “FabLab”. Founded by him, the architectural bureau Guallart Architects have developed the projects of Fuji and Keelung ports in Taiwan, Sociopolis in Valencia and currently they are working over several projects of different scale in various countries.

He is the author of books “Geologics” and “Self-Sufficient City” and a co-author of the “Dictionary of Advanced Architecture”. His works have been exhibited at the Vienna Biennale and at the Museum of Modern Art in New-York. The American Institute of Architects organized his personal exhibition in Washington in 2010.